We celebrated our little guy’s 3rd birthday last weekend at Disney World! We decided 2 weeks before to plan the trip!  We had been debating what kind of birthday party to have for him and when I had the idea to go to Disney, we threw the whole birthday party idea out the window! Who wouldn’t want to celebrate their birthday at Disney?! Since we live only 2 hours away, it was easy to leave first thing Sunday morning, spend the day at Magic Kingdom then do a character breakfast Monday morning and head back home. It was all pretty quick but so worth it! My husband even said to me multiple times, it was such a great trip! Here’s what we did. (Disclosure: I am by no means a Disney World expert, just sharing our experience!) We left early Sunday morning around 6:30am to make the 2 hour drive south. We stopped by our hotel to park the car and took off on the bus from there to Magic Kingdom. We had the park hopper, thinking we would go to another park but we stayed at Magic Kingdom the whole day! I had made fast pass reservations, but we missed our first reservation. No big deal, we had another reservation for “It’s A Small World” right after so we made that just in time! Next up, was Peter Pan, a quick lunch and then we made our way to the other side of the park to ride the choo choo train all the way around the park. Dockery was definitely looking forward to this! After the train ride, meet Mickey was next! We’ve had some issues with Santa and the Easter Bunny so it was so fun to see him love Mickey! We huddled up at Tony’s for a quick rest and planned out the rest of the afternoon. Or so we thought, the rain was starting to roll in but we were able to catch the afternoon parade that comes around with all of the characters at 3pm. The afternoon turned out different than we expected with the rain looming but it never got to us! Majority of the people left so that made the lines barely have any wait time! We were able to ride the tea cups back to back which he loved , did the Mickeys Philphar 3D show which was so cute and Monsters Inc! We had dinner reservations for The Chrystal Palace which did not disappoint (highly recommend the bread pudding and brownie with ice cream)! By the end of the night we were all really tired and ready to head back to the hotel. The next morning we were up early for breakfast with Mickey at The Contemporary resort. This was a highlight of our trip! Seeing Dockery celebrate his 3rd birthday with his favorite characters was so fun! The food was delish and the whole experience is one that I would do over again!  A quick monorail trip around the parks was so exciting to him and then we were in the car headed home. Here are a few essentials that made our trip easier!

This portable charger is a must have! I ordered it last minute and I’m so glad I did! I needed to charge my phone in the park and it was so nice to be able to keep going while it was charging. I also forgot my phone charger at home, so I was able to charge it again that night and the portable charger didn’t need to be recharged again itself!

I was so happy we packed rain jackets! It definitely can start raining at anytime. This cute floral one came in just in time and was so easy to fold away without taking up much space!

This insulated sippy for Dockery was so nice to have for him to keep his water cold and not have to worry about sippy cups that condensate.

We used a stroller for him which was a huge saver for not only him but our stuff too! We never really use the stroller for him anymore but was so nice to have when we went from one side of the park to the next.

HERE’S WHAT I WORE

Thank you to Disney World for sponsoring a portion of our trip! 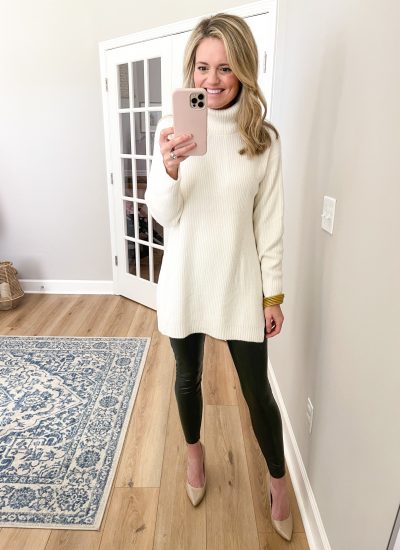